What Is Match Play in Golf? 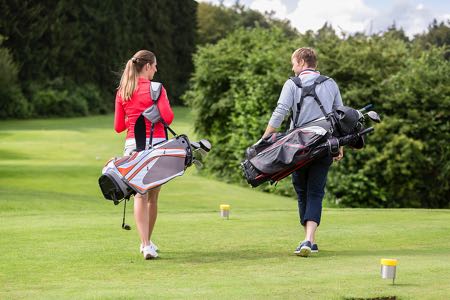 While stroke play is the most common form of scoring golf competitions, match play is another popular form of the sport. In match play, a player or a team can earn points for each hole in which they score lower than their opponent.

The winner or winners are those with the best score at the end of play. While all four of golfs ‘majors’ are stroke play tournaments, some major events follow a match play system. These include the World Match Play Championship and the Ryder Cup. 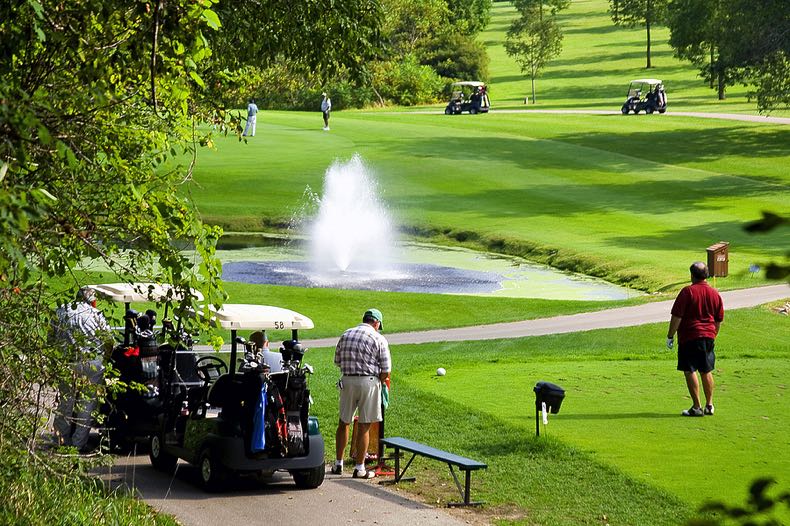 In match play, scoring is completed according to individual holes having been won, lost or halved. On each hole, one point is the maximum score no matter how much better a player or team is than the other. Players go on as normal, counting strokes as they would in stroke play. The golfer with the lowest score on the hole after it is complete gains a point. If both golfers or teams tie the hole, it is halved.

It is important in match play scoring to keep track not only of the points tally, but also how many holes remain. For instance, at the beginning of an 18-hole match, naturally both players or teams are all-square. If Player 1 were to birdie the first hole and their opponent makes par, then Player 1 is 1-up with 17 to play. They may halve the next three holes, for example, before Player 1 wins the fifth. They are then 2-up with 13 to play. As soon as a player or team is ‘up’ more holes than there are holes left to play, the match stops. So, if a player were to go 3-up with 2 to play they win. This is recorded as the player having won ‘3 and 2’.

‘2 and 1’, ‘5 and 4’, etc are all winning scores. The only difference to this format is when a player was already 1-up with 1 to play and also wins the last, that is known as having won ‘2 up’. As soon as a player or team leads by the same number of holes as there are holes remaining, there are known as “dormie”. So, being 3-up with 3 to play is known as “dormie-3”.

In some match play competitions, players or teams can play a sudden death playoff should the scores be level at the end. In the Ryder Cup, however, a halved match simply leads to half points in the total for the tournament. While in stroke play a hole must be finished, in match play when the ball is very close to the hole and it seems impossible to miss, a player may concede the hole to their opponent which is known as a “gimme”.

Scoring match play for handicap players is done differently to stroke play. In stroke play, a player with a 12 handicap deducts one stroke from the 12 hardest holes on the course according to the scorecard handicap rating. This gives their final net score which can be compared to all others in the field. A 20 handicap player would deduct 2 strokes from the two hardest holes and one each from all the other holes to achieve the same result.

There are precious few professional match play tournaments compared with stroke play events. The best-known include:

The Ryder Cup is the world-famous biennial men’s team competition. It is fought out between teams from the USA and Europe with the venue switching between courses in those two territories. The event is staged as a joint-venture between the PGA of America and Ryder Cup Europe, the latter being made up of the PGA of Great Britain and Ireland, the PGA European Tour and the PGAs of Europe.

Previously, the Ryder Cup was staged between the USA and Great Britain & Ireland. Since 1979, when it was changed to USA and Europe, American teams have won it outright nine times with Europe taking 11 titles. The Ryder Cup is a match play competition but has various such competitions between players. Teams of twelve are involved overall.

The competition runs from Friday to Sunday with 28 matches played in all. Friday and Saturday features 4 x fourball matches and 4 x foursomes. On the final day, 12 single matches take place with all players taking part. On the first two days, captains can select any eight players from the 12 available for each session. Given that there are 28 points to play for in total, the “magic number” is 14.5. As soon as either team reaches this figure, the Ryder Cup has been won.

The WGC Match Play is a pro men’s tournament. The event is made up of 64 players who qualify by virtue of being in the top-64 in the world rankings ten days before the competition begins. The competition is split in two; firstly, when all players are split into 16 groups of four. The groups then play in a round-robin format on Wednesday, Thursday and Friday.

A point is awarded for a match play win and a half-point for a tie. The group winner then goes to the next round. The second phase is a straight knockout phase. The round of 16 and quarter-finals are played on Saturday, with the semi-final, third-place playoff and the final all taking place on Sunday.

The Solheim Cup is the top biennial women’s pro match play tournament. Much like the men’s Ryder Cup, the Solheim Cup is played out by teams representing Europe and the United States of America.

The tournament is named after Karsten Solheim, a golf club manufacturer who was instrumental in the Cup’s creation. As of the 2021 tournament, the USA has won 10 Solheim Cups to Europe’s seven.